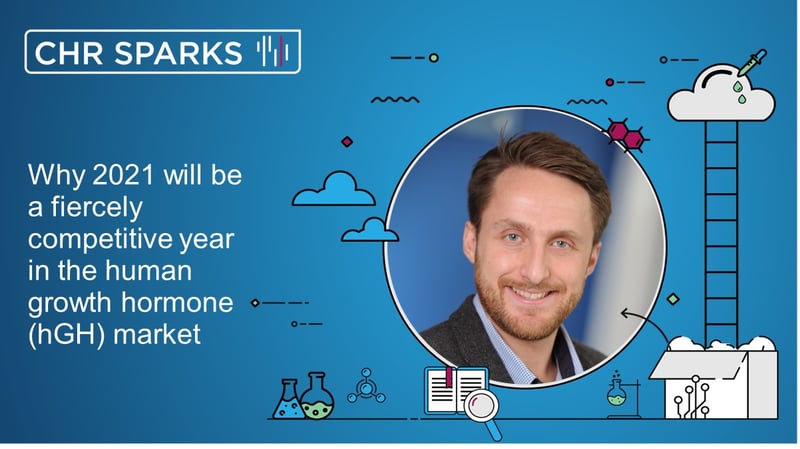 Long acting hGH products will be launched in 2021 in paediatric hormone deficiency, but all the entrants face competitive challenges from each other and entrenched daily competitors.Genentech first commercialised recombinant hGH for daily use in 1985. Since then, many entrants including Pfizer, Teva, Sandoz, Merck KGAA, and Novo Nordisk have launched their own products to treat multiple indications, including paediatric growth hormone deficiency (PGHD), which represents approximately 50% of the market. The total market value for growth hormone products is now an estimated ~$3 Billion.

Yet adherence to daily treatment has always been a challenge for young patients and their families. Although it was hypothesised that reducing the dosing frequency would ease this challenge, putting it into practice has been an uphill battle over the last 20+ years.

Genentech and Alkermes launched the first long acting (LA) hGH, Nutropin Depot, in 1999 but later discontinued it; publicly stating that this was due to the resources required for manufacture and commercialisation of the product. However other reported drawbacks included a viscous formulation, which required large volumes often of more than one injection and resulted in large lumps for several days at the injection site. LG Life Sciences’ LB03002, another depot formulation launched in Korea in 2007, and won EU approval in 2013; but its marketing authorisation ceased to be valid as BioPartners GmbH, its commercialisation partner, failed to market the product.
PEGylation was another approach tested to extend the half-life of hGH. Competitors Ambrx, Novo Nordisk and Pfizer eventually discontinued development of their molecules, in the mid-2000s, after observing PEG had accumulated in the ependymal cells of the choroid plexus in preclinical primate studies. GeneScience Pharmaceutical has been more successful with its PEGylated formulation, Jintrolong®, in China; where it has been used for the treatment of PGHD since 2014.

The second half of 2020 saw several important events in the long acting space. Firstly, Novo Nordisk’s Sogroya®, an albumin-binding GH, was approved in the US in late August 2020 for adult growth hormone deficiency (AGHD). Novo will complete its paediatric Ph3 trial in June 2021. Secondly, Ascendis filed for TransCon hGH, an inactive prodrug bound in an inert carrier, after demonstrating superiority versus standard of care, daily Genotropin® (somatropin). Approval is expected by the end of Q2 in the US. Finally, Opko/Pfizer shook off earlier trial failures in AGHD to get somatrogon, a growth hormone fusion protein, successfully through a Ph3 in PGHD, demonstrating non-inferiority to the daily Genotropin®.

Taking a critical view of the upcoming year, these three companies must navigate common and individual competitive, patient and payer-focused challenges to achieve success.
Ascendis treads an unknown path as it launches its first therapy and competes with two hugely experienced global companies. It is in a race to scale its sales force in core markets, to take advantage of the first mover opportunity to capture market share. Partnership in certain markets where Ascendis lacks footprint or experience, as done in China, will enable access to established field forces and relationships.

Opko/Pfizer are not far behind Ascendis in expected launch timing in the US/EU, but they face the challenge of combatting TransCon hGH’s compelling clinical trial data. Taking advantage of Pfizer’s global capabilities may enable first-to-launch in some ex-US regions, whilst also providing the opportunity to explore an indication expansion strategy; which would build a positive view of the safety and efficacy of somatrogon.

Novo Nordisk is anticipated to confidently enter the PGHD space despite the expectation of being third to launch. It can benefit from Ascendis and Pfizer’s preparation of the PGHD market, will have learnt from its experience launching a LA in AGHD, and, as the established leader in the daily space, it brings tremendous experience as well as well-established relationships. We expect Novo’s daily Norditropin® to remain a popular choice, with the weekly Sogroya® providing an option for prescribers and both existing and new patients.

There is also the need to capture market share from competitors with daily treatments. The longstanding LCM efforts to differentiate in the hGH space have centred on combination devices and beyond the molecule offerings, recently including digital applications. Merck KGaA exemplifies these activities; its Easypod autoinjector and transmitter have long been on the market with over 24,000 users, while digital offerings include apps such as the adherence supporting Growlink, as well as the child-facing Kicorupouss and Saizoom, which gamify disease education and management. These activities contribute to predictions from analysts that Merck KGaA will retain the majority of its current €200+ million market share through 2026 (unlike most dailies which are anticipated to lose share to LA hGH products). Merck KGaA’s efforts highlight the importance well targeted digital initiatives can bring in this space; utilising digital efforts from other TAs (i.e Novo Nordisk in diabetes) or partnering with agile tech companies could be techniques for the long acting entrants to employ.

From the uptake angle, it is one-dimensional to think that there will be an immediate rush by all patients and prescribers, to long acting treatments, and the three LA hGH competitors will have been critically segmenting the population. Of the patients receiving daily treatment, there are several groups who will need a tailored approach to ensure adoption: those who are happy from an efficacy point of view and do not want to risk change, those for whom daily treatment works well operationally and who don’t want to switch to weekly dosing, those who don’t trust new therapeutics until they are tested in the real word. Ongoing market research is key to identify these groups and support messaging to increase adoption of these novel therapies.

Another challenge is persuading payers to cover the expected premium for these new products. Ascendis is on the front foot with superiority data versus daily Genotropin®, but will feel most pressure to charge a premium to begin generating revenue and support its clinical pipeline. For Pfizer, non-inferiority may be enough for approval, but might not be compelling in payer discussions if seeking premium pricing. Additional cost-benefit analyses, aimed at highlighting if the new treatments and regimen increase adherence, and potentially real-world efficacy, will make these negotiations progress more smoothly.

These dynamics, alongside wider global events, provide disruption to a mature market. The competitive environment of 2021 will require each company to track and understand the others’ efforts. It will also provide an analogue for brand teams in other mature markets to learn from, whether they are an upstart innovator bringing a new treatment to market, an entrenched player updating its offering, or a mature player wishing to retain market share.

Click here to learn more about how CHR provides consulting and support in competitive intelligence in pharma and healthcare.