A view through the weeds: Where do we stand on medical cannabis 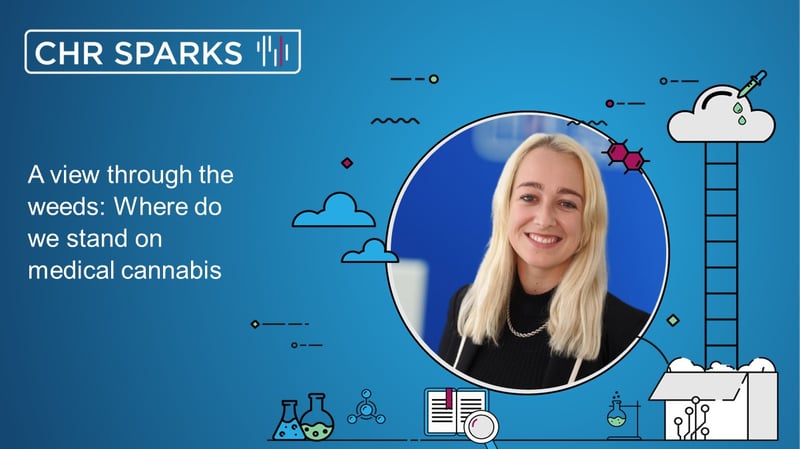 Medical cannabis is no new topic, with its use being traced back to ancient societies around the world. Over the past few years however, there has been a definitive upturn in interest and research from Big Pharma around the potential for cannabinoids to offer clinical benefit in numerous diseases. Starting out with a few technical terms, marijuana/cannabis is typically used to describe the actual plant or associated products, whereas cannabinoids refer to the isolated biologically active components in cannabis. The two most common and well-known cannabinoids are delta-9-tetrahydrocannabinol (THC), and cannabidiol (CBD), although there are also numerous others.

What does the current market landscape look like for pharmaceutical cannabinoids

Looking into regulation, the US Drug Enforcement Administration (DEA) currently lists cannabis as a Schedule 1 controlled substance, meaning that it cannot legally be prescribed, possessed, or sold under US federal law. Schedule 1 refers to drugs that the DEA defines as offering no currently accepted medical use. Despite the DEA’s definition, many US states have enacted legislation permitting legal use of cannabis for certain medical treatments, such as for cancer-related pain or nausea, HIV/AIDS, spasticity, seizures and glaucoma to name a few.

Although medical cannabis is currently prescribed across the US under state law, it is not actually approved by the US Food and Drug Administration (FDA) for any medical use. There are however four isolated cannabinoid based pharmaceutical products that are FDA approved. The cannabinoids used in these products are either plant-derived compounds extracted directly from the plant and purified, or synthetically produced compounds that are created in a lab as an equivalent to the natural occurring compound.

The first cannabinoid product to be approved by the FDA was Marinol (oral capsule containing dronabinol, synthetic THC), as early as 1985, with numerous generic versions of the product now available. The second cannabinoid to gain approval was Cesamet (oral capsule containing nabilone, synthetic THC analogue), also originally approved in 1985 but only really brought to market in 2006 when the asset was acquired by Valent Pharmaceuticals. There was a long wait before the next cannabinoid entered the market in 2017, with the approval of Syndros® (oral solution containing dronabinol, synthetic THC). These three synthetic cannabinoid products are all approved to treat cancer-related nausea and vomiting and loss of appetite in AIDs patients. GW Pharmaceuticals broke ground in 2018 with the approval of Epidiolex® (oral solution containing cannabidiol, plant derived CBD), the first FDA approved plant-derived cannabinoid and also the first cannabinoid to be approved for treatment of seizures associated with two rare forms of childhood epilepsy called Dravet syndrome (DS) and Lennox-Gastaut syndrome (LGS). This approval was expanded in 2020 to include seizures associated with the rare genetic disease tuberous sclerosis complex (TSC). Another product targeting near-term US market entry is GW’s second leading asset Sativex® (oral spray containing nabiximols, plant derived THC and CBD mixture), having already gained approval in 25 ex-US countries for spasticity due to multiple sclerosis (MS) and with pivotal Phase 3 US trial data set to read out within the next year.

Looking to the future and expanding the medical potential of cannabinoids

The progress in clinical research that supported these approvals and the increased awareness from the public and regulators has contributed to a significant rise in interest around better understanding how cannabinoids interact with systems in the body, and what other medical benefits they could offer.

Although running clinical trials involving a controlled substance poses a fair number of challenges, there is still active development of cannabinoid-based pharmaceuticals across a wide range of diseases, with particular interest in cancer. With cannabinoid drugs and medical cannabis currently used to manage cancer-related symptoms, it is only natural that the question arose around whether cannabinoids could move beyond symptomatic management into antitumor efficacy.
Pre-clinical cell-culture studies have shown potential for cannabinoids to offer antitumor effects in various types of cancer, including breast, lung, skin and brain cancer to name a few. These effects are achieved by using cannabinoids to target endocannabinoid receptors in tumour cells, looking to impact tumour cell proliferation and migration, and induce cell death. Pre-clinical studies have also suggested that cannabinoids could offer synergistic activity in combination with chemotherapy.
Further research is needed however to better understand the complex effect of cannabinoids on cellular processes, as well as to validate their efficacy in human trials. Although there are currently no cannabinoids in later-stage development for antitumor effect in cancer, the promising evidence and active development we have seen so far definitely make cannabinoids something to keep an eye on for the future of fighting cancer.

Learn more about how CHR analyse and evaluate changing markets and  commercial landscapes in healthcare and pharma.